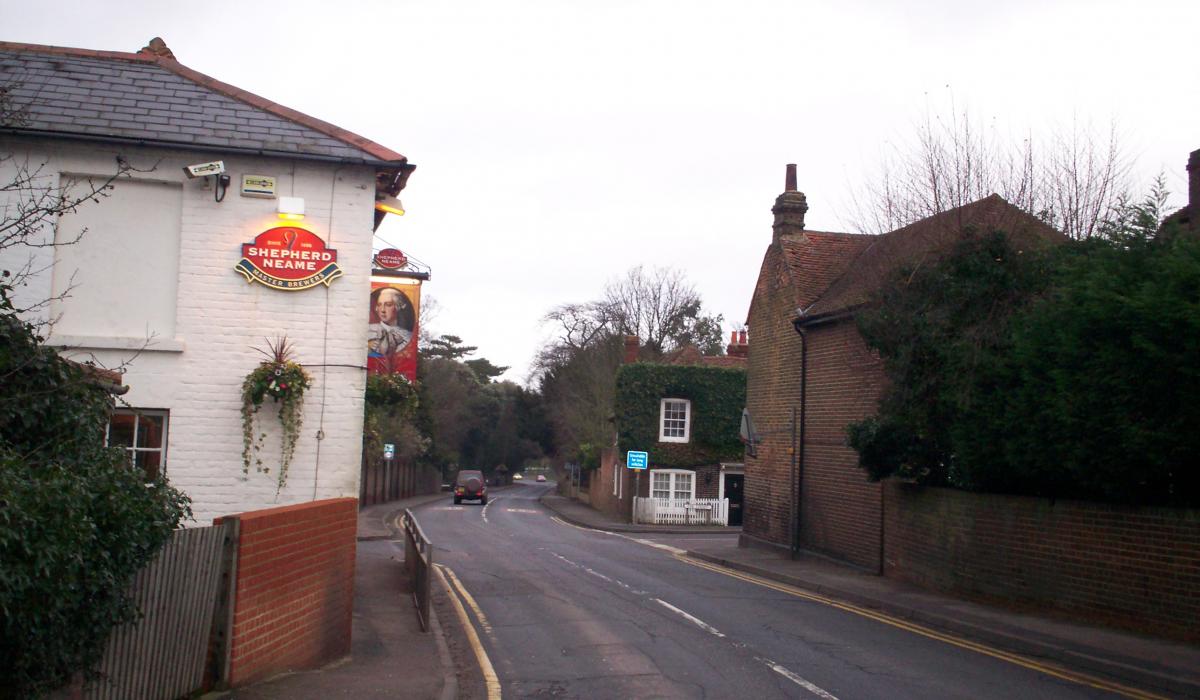 Starting at the north end of the village we have the "Railway Tavern" which, under proprietor Bill Friend was famous for its range of whiskies, at one time offering more than 150 brands. It was a staging post for the Mail Service between Gravesend and Maidstone and pre-dates the building of the railway station in 1861.

Journeying further along the Wrotham Road a pub that once stood on or very near to Hook Green was “The Neville Arms”. The next public house was “The Fox and Hounds”, first mentioned in 1836, with the present building built in 1924, now called "Bartellas", and is a licensed restaurant.

We now have a longer journey before we reach "The George Inn". This was the original heart of the village where the church wardens met, where the first village school was established and the site of the village stocks and pillory (what a deterrent this would be to vandals and others guilty of anti-social behaviour!). The earliest mention of The George is 1598 and originally called "The Market Crouch" (i.e. Cross). The present sign is that of an 18th Century Hanoverian King. Rumour has it there was a secret tunnel from The George to the Church or even Meopham Court behind the Church.

The next pub on our journey would have been "The Swan" (originally called "The Leather Bottle" and later "The Cricketers") dating back to the 17th century but now a private residence.

The next public house, the "Cricketers Inn", at one time included amongst its activities feeding and watering of the inmates of the Village Lock Up situated on the Green. For a short time recently it was called "The Long Hop", but has now reverted to its original name when it moved to its present location in 1790.

Across the corner of the Green is "The Kings Arms", now a licensed restaurant but once known as “The Smiths Arms” which changed its name in the 1660s as a token of loyalty to the Crown following the restoration of King Charles II after the Civic War and Commonwealth.

Beyond Meopham Green was "The Prince of Wales", now a private residence, presumably named after Queen Victoria’s first child, later King Edward VII. This was built in front of an earlier public house, “The Coffin”. Two more former public houses follow along the road: “The Two Brewers”, presumably closed due to lack of trade in its relatively isolated position and “The Plough”, burnt down at the end of the 19th century.

Entering Harvel we come to the "Amazon and Tiger" the original building now a private residence. The current building dates from 1914 and is distinctive in that it was built like a private house rather than a pub in deference to the wishes of the congregation of the Chapel held in the hall opposite – now the village hall. This is the last existing public house on our journey through the parish – a little further down the Harvel Road you come to a private residence which was previously “The White Horse”. Its heyday was in the early 1940s when it was the nearest pub to the large military training camp based in what is now Vigo Village. Trade dwindled and it closed in 1952. Another Harvel pub long gone is “The Rose”, exact location unknown.

I hope you enjoyed our pub crawl around the parish.

Do you have a Highways Issue to report?